A survey undertaken by Selco Builders Warehouse has revealed tradespeople are happier and earning more than university graduates.

Surveying over 500 tradespeople, Selco wanted to determine how their experiences differ from those who attended and graduated university.

Higher education doesn’t necessarily guarantee high earnings and security like it once did. So with many people considering other routes, could a career in the trades be a better option?

There’s no denying that earnings can play a big part in your decision when choosing your career path. Luckily for tradespeople, earning a good wage is common in the industry.

The survey found that you’ll be earning a living wage as a tradesperson by the age of 22. For the general population, this will vary between the age of 22 to 29. Generally, attending university delays people going into full-time work. Many rely on part-time jobs, grants and loans to cover living expenses until they graduate. 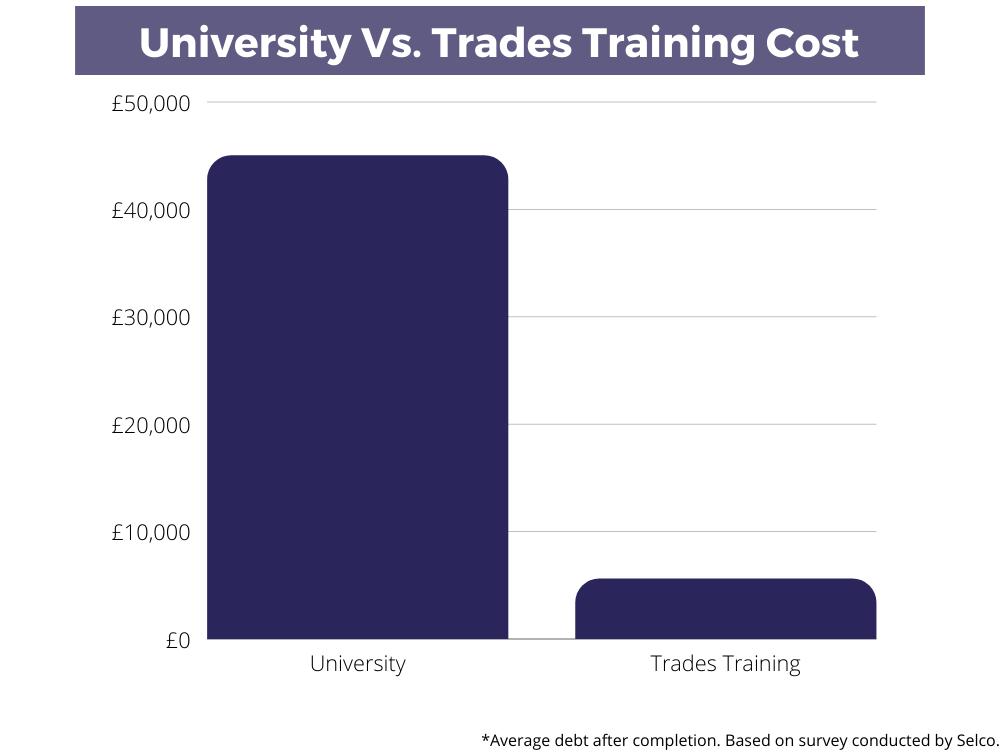 Speaking of loans, the average graduate will owe around £46,000 after training and education. Tradespeople, however, owe just £5,600 in comparison.

It should then come as no surprise that as tradespeople earn sooner and have fewer debts to pay, they also boast a comfortable savings pot. The general public, in contrast, have on average just £600 in their savings account.

It’s clear that a career in the trades has its financial benefits, but is there anything else that may sway people?

As well as the financial side of things, the survey also uncovered that life as a tradesperson could help you reach milestones sooner.

Leaving home to live independently is a goal for many young adults across the UK. Selco’s survey found that that dream becomes a reality over a year earlier for tradespeople. Leaving home at 23, the rest of the UK don’t take that leap until they’re 24.5.

The next step is usually homeownership, but many tradies take it even further. Owning their own property three years earlier than the rest of the population isn’t enough for tradespeople, as 1 in 6 will also own more than one property at one time.

Considering their area of expertise, many tradespeople are able to renovate at least some of their property themselves. Saving them hundreds, if not thousands of pounds, that money can be invested in more property, their business, or added to their savings pot.

Ultimately, everyone wants to be in a position where they are happy in their careers, and Selco found that this is the case for 73% of tradespeople. In comparison, that figure was between 41% and 65% for the rest of the UK.

Why are they so happy? The survey found it to be down to a combination of things. Pride in their work, confidence and focus were just some things that bring job satisfaction to tradespeople in the UK.

What’s right for one person isn’t necessarily suitable for another. It’s all about finding the education and career path that suits you.

Some careers require a degree, making university a must, but there may be several options available for others.

Interest in the trades is growing – and for a good reason. If you’re interested, you can find out how University Vs. Vocational training compares to help decide which is the correct route for you.

Tag:Money Matters, On The Tools